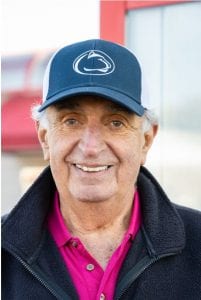 Giant Industries is deeply saddened to report the loss of our founder and CEO, Ray Simon.  Ray was 83 years old and passed away peacefully Friday, September 18, 2020 in Toledo.  He was born on April 4, 1937 to Andy and Julia Simon in Toledo.  Ray graduated from DeVilbiss High School in 1954.  He then obtained his bachelor’s degree from the University of Toledo in 1959.  Ray’s biggest passion was airplanes, especially flying.  Having owned and operated numerous planes throughout his life.  He enjoyed fishing and was an avid tennis and pickle ball player.  He did this multiple times a week before he fell ill.  Ray like spending time with this family and grandchildren.  He was born with an infectious smile and made friends everywhere he went.

Ray was a consummate entrepreneur, founding multiple companies throughout his career.  In the 1960’s, Ray worked in the car wash industry at Gail Industries.  Ray went on to represent Cat Pumps in the late 1960’s and early 1970’s.  Simultaneously, he helped to start Tufco Industries in Green Bay and started Giant Towel company in 1972 in Toledo.  Giant towel company later was named Giant Industries and his legacy continues under the leadership of his son, Ed Simon.

Ray ventured into many aspects of the car wash market and worked alongside the leaders of International Touchless (later Southern Pride) and other leaders in the car wash industry.  At Giant, he will be remembered for his joy for life.  He could often be found walking around the offices with his cell phone speaking to one of the many people he knew.

Back to Top
©2022 Giant Pumps All Rights Reserved.
Web Design By Neon Goldfish